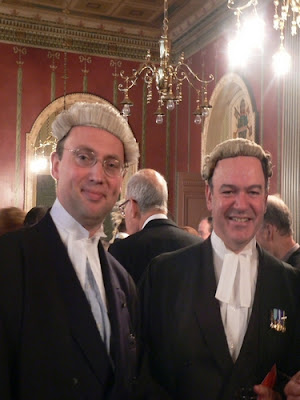 ...is the annual Mass celebrated by the Cardinal Archbishop of Westminster for the start of the new legal year. It's attended by judges, barristers, and solictors - and here is Jamie (on the right) in his wig and gown, at the Reception in Archbishop's House after the Mass.

It's all very splendid and traditional - judges in red robes, full-bottomed wigs etc - and the Cardinal preached very well, about St Thomas More, citing him as an inspiration for lawyers today faced with laws that do not dovetail with the ethical principles of the Gospels, and urging that his courage and prudence were good examples to follow. You can read the whole of the Cardinal's sermon here, and it's recommended.

Needless to say, some ghastly Government bureaucrats have announced that Britain's traditional legal attire - wigs and gowns and so on - is to be abolished or restricted soon. (The legal profession was asked for its opinion and when this was opposed to the change - for important reasons including preserving the message of impartiality and anonymity of judges - this was of course ignored). So the Red Mass will be one of the few occasions when it can all be seen - and with it some idea of the solemnity of the idea of law based on wisdom and justice.

Hey Joanna..he's handsome! But then i've a lovely picture of you on my blog..check it out!