The KEYS, the Catholic Writers Guild...

... held an excellent meeting  at which author Paul Shrimpton spoke about his book on John Henry Newman's influence on the young German anti-Nazis, Hans and Sophie Scholl. They were also influenced by a range of other great writers from the ancient to the modern era including Maritain and de Lubac...

The Scholl story is of great importance, with useful messages for our own era. Read here.

The Keys is proud of its history which dates back to its foundation by a team of writers working for GK's Weekly in the 1930s. I have been a member since the 1970s, when Fleet Street was still the heart of Britain's journalism. At one time, Guild meetings were held in various Fleet street pubs where a room could be hired. The Universe newspaper had an office at 21 Fleet Street and then moved to Bowling Green Lane...Then for many years, the Guild Church was St Etheldreda's, Ely Place, where a plaque in the crypt (where we had supper, following Mass in the main church above)  now records the fact. We then moved to St Mary Moorfields - again, wonderful cheery evenings with Mass, dinner, and a talk - and now we are at Farm Street, where the beautiful church welcomes us. The atmosphere, the friendship, and the sense of being a Guild with its own unique story, thrives...and in a decade or so, we will reach our Centenary...

Over the years, there have also been branches of the Guild in, among other places, Manchester and the North East. The Keys - honouring St Peter of course -  has always been the special name of the London branch.

Posted by Joanna Bogle at 10:56 am No comments:

...and while the headlines heralded the victories of the BREXIT party...

...I had a quiet day finishing some work on the History of St Mary's University, and walked along the river to John Henry Newman's childhood home at Ham.

Want to know more? You could obtain this book...just published.

And, on a separate topics: to the kind reader who sent a Comment to this Blog concerning my children's book - I am working on a sequel, but it has been delayed again and again by other projects, and by occasional bouts of writer's block...it'll be on its way eventually!
Posted by Joanna Bogle at 9:12 pm 2 comments:

At the Dominican church...

...on Haverstock Hill,  a Rosary Garden, dedicated to the Luminous Mysteries, was blessed yesterday evening, following a glorious sung Mass in the church.Children from the Rosary Primary School sang beautifully, a lovely Ave Maria soaring up at Communion...and then the children themselves trooped up, very reverently,  to receive Communion or a blessing,  a touching sight.

The heart of the new garden is a rather fine statue - Our Lady of Cana. This of course is the second Luminous Mystery, and is peculiarly important for our times, with the denigration of marriage and the muddle over the importance and significance of male and female.

At night the garden is illuminated - truly luminous...

Following all this, a reception was held in the parish hall, with lots of food and wine, friends to meet, lots of good conversations, a celebratory spirit. The hall is to be transformed, in due course, with major renovations, and to become the John Paul Centre, welcoming people to the shrine...
Posted by Joanna Bogle at 11:47 am 1 comment:

...and there was something a bit odd.. Very long (almost 2foot!) ballot paper. First came the Parties: top of the list was Animal Welfare Party, and next would logically be Brexit. But no.  For some reason, it had been decided that Brexit begins with T,  Thus: The Brexit Party. But this did not apply to Labour, Lib-Dem etc. Weird.

After the list of parties - finishing with Women's Equality - came a long list of independent people standing.

I duly cast my vote and also had a proxy for another family member. This was arranged efficiently. But it is strange that one is not asked for any identity: when I arrived and gave my name and address they simply checked me, plus proxy arrangement etc, on the list. Trusting, and in its way atractively British. But in today's Britain...
Posted by Joanna Bogle at 12:10 pm No comments:

...with Clare Anderson, co-author of John Paul II:Man of Prayer.  So good to be talking in the sunny garden, catching up on news. When we first met, years ago,  I was an Army wife just returning to Britain after years abroad and establshing a new home, and C. was the mother of a young family....today the Anderson  children are grown up and married, and she and husband L. are joyful grandparents, with two more babies due this year...

Our mutual writing projects over the years have been fun and satisfying. At one point we'd meet up at Paddington station - convenient for both of us - and work on the JPII book together. Staff there at The Mad Bishop and Bear were friendly and interested, and even brought us extra free cups of tea as we worked away...today I dropped in  there for coffee en route to the Andersons, and thanked the team.  The book sells well...I've just ordered some more for some forthcoming events...
Posted by Joanna Bogle at 11:59 pm No comments:

...for some other material, I came across this and  loved it. ENJOY!

...and meanwhile back in London...

WE WALKED UP GLASTONBURY TOR...

...and sang "Jerusalem" at the top, with the most glorious view of the countryside all around.

This was a  Catholic group gathered for a for a day conference at the Shrine Church of Our Lady of Glastonbury. There was a most beautiful Mass, then a time of silent adoration,  finishing with Benedction...and then a welcome in the parish hall, and I spoke about the Glastonbury Story. Joseph of Arimithea, the Holy Grail, the Arthurian legend...and the Abbey and the centuries of prayer, and the martyrdom of the last Abbott...and today, and all of us gathered to pray for our dear country...


Posted by Joanna Bogle at 7:08 pm No comments:

...for a special weekend this summer:

Jam, cakes, History, Heritage and Evangelisation
9th to 11th August. A weekend exploring Catholic culture and history, and how to use it to evangelise. For more details, and to book, contact dowryhouse@walsingham.org.uk
Posted by Joanna Bogle at 11:31 am No comments:

...meanwhile has pointed out an essential home truth to women from religious orders who asked him about the possibility of female deacons.

Essentially, the answer is: no, women deacons are not a possibility, though no one minds having some more research and discussion in order to help us understand that fact more fully.


“In regard to the diaconate we must see what was there at the beginning of revelation, it there was something, let it grow and it arrives, but if there was not, if the Lord didn’t want a sacramental ministry for women, it can’t go forward. For this reason we go to history and to dogma."
“We are Catholics,but if anyone wants to found another church they are free [to do so].”
Which is rather what some of us have been saying for years.

Thank you, Papa.
Posted by Joanna Bogle at 9:57 pm No comments:

...and again I was late, this time delayed by a demo in Parliament Square...

But I made it to Westminster Cathedral, and  some of us were able to set off for what turned out to be a lovely walk, taking in St James' Park and Whitehall etc etc...

And here we are on the bridge across the Serpentine, with Buckingham Palace in the background: 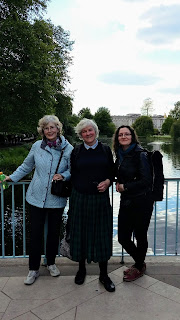 Posted by Joanna Bogle at 8:51 pm No comments:

Posted by Joanna Bogle at 8:50 pm No comments:

A garden for Mary...

...and a wonderful book launch. It was a joy and priviledge to be invited to write for the Foreword for  A garden for Our Lady by Felicity Surridge, with its enchanting illustrations by Malcolm Surridge. The book was launched with a wonderful party - wine and talk and neighbourliness on a summer evening...and the Mary Garden that the Surridges have created at St Joseph's Church, New Malden,is a joy. The Surridges have done careful research and discovered the old Marian names for many of our flowers and plants - did you know that snapdragons were once known as "Baby Jesus shoes" and that Rosemary is "Our Lady's nosegay"?  And find out about the legend of the juniper tree, and about irises representing the spear that wounded Mary's heart...

You can order the book here, and it would make a delightful present for any Catholic friend - and anyone who enjys gardening or loves gardens.  And just buy it for yourself to enjoy. It combines gentle gardening advice with lovely stories and legends, and is a delightful book to browse through as well as one to consult for specific information - and for prayers and Rosary meditations. Best book that has come my way this year.
Posted by Joanna Bogle at 12:34 am No comments:

It's known for a vast expensive noisy rock festival for rich people on some land outside the town.   But its real significance lies elsewhere: the town is linked with Joseph of Arimithea, the Holy Grail, the story of King Arthur, saints including St Patrick and St Dunstan...and much more, including the martyrdom of the last Abbot of Glastonbury, up on Glastonbury Tor.

Come to a prayer-festival organised at the church. Info from the parish: read here...
Posted by Joanna Bogle at 3:11 pm No comments:

...a planned new law in California  stating that priests must reveal  sins that are confessed to them.

But think how such a ghastly law, if passed, would be used!
Read here...

...and staying with these lovely Sisters at Dowry House.  And exploring local places associated with the Anglo-Saxons...round tower churches, windswept beaches...

Come on a Dowry House retreat this summer, and discover traditions, heritage, and  new ways to evangelise!
Posted by Joanna Bogle at 9:18 pm No comments:

...is much in the news, as his canonisation seems increasingly likely to be quite soon.

DO READ this excellent review of a new edition of Newman's essays.


Posted by Joanna Bogle at 8:39 pm No comments:

Utterly angry with myself...

...I failed to check about the trains (Bank Holiday weekend)  and so missed the group of walkers waiting for me at Richmond,  for what should have been a lovely History Walk along the Thames to Ham.  They waited and waited...

By the time I arrived all had gone, and there was a (justifiably) hurt and upset message on the History Walks email later on...

I can only apologise to everyone. A throughly mixed-up and annoying day - and all my fault.
Posted by Joanna Bogle at 7:45 pm No comments:

...the Church of the Precious Blood at London Bridge will be consecrated.  It dates back to the 1890s and has been a consistent presence in the life of The Borough and Southwark since that time, through two world wars and massive social change...and its extensive renovations are now almost complete. Mass 6.30pm on Monday July 1st and a further chapter of history opens...
Posted by Joanna Bogle at 10:36 am No comments:

Newer Posts Older Posts Home
Subscribe to: Posts (Atom)
"May all Britons continue to live by the values of honesty, respect and fair-mindedness that have won them the esteem and admiration of many."