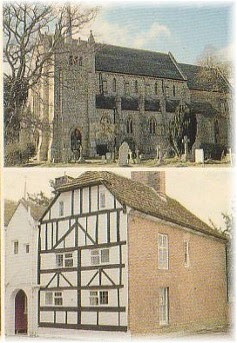 ...is a beautiful and important shrine in Sussex, dedicated to Our Lady of Consolation and looked at its most enchanting in August sunshine as I arrived there, singing, on Monday afternoon. There was a most wonderful reception from the parish group from New Malden, who came running up to greet me and broke into applause! A priest at the shrine rang the church bell, I told of my adventures (horrible journey down the main road with heavy lorries roaring past, wonderful joy to turn off down the quiet lane marked with a sign to the shrine...) and then I was given cups of tea...

The parish at New Malden had planned this Pilgrimage to coincide with my arrival at the Shrine and to celebrate the Feast of the Trasnfiguration. We had Benediction in the beautiful shrine church, with Father Peter and our Deacon John, and a most interesting talk about the shrine by the priest in charge, Father David Goddard. There is a hidden chapel in the attic of the priest's house, where priests celebrated Mass in the days of persecution, and a priest-hide where they could go if the house was searched. The magnificent shrine church dates of course from a later period and was begun by a French emigre priest who, in an extraordinary turn of events, was here as a refugee from France when the Church there was facing its in time of danger. In due course there were all sorts of things here, including an orphanage and even the beginnings of a small seminary.

It was a beautiful afternoon. Groups went up the twisting stairs to the little chapel, while others explored the lovely Rosary Way in the garden. Father David is a former Anglican, and married, and his wife took the groups up to the chapel and told its story. There are so many layers of history here. The land was owned by the Carryl family, staunch supporters of the Old Faith, and when they were driven out after years of fines and persecution, they finally went to America: a member of the family, Bishop John Carroll, was the first Bishop of Baltimore.

I was given a grand farewell by Father Peter, Father David, and Deacon John (who took pics - some will appear on this blog in due course) as the parish group departed for home...as I set off down the lane the scent of the lavender I had gathered in the churchyard wafted up from my bicycle-basket, and there were birds chirruping, and I had Father David's final instructions in my head:"Straight to Partridge Green, and then turn left there and down the lane..." I followed his directions and was soon on my route to Ansty, past fields all golden with the harvest.
Posted by Joanna Bogle at 6:16 pm

John Carroll, who was the 1st US catholic bishop, had a cousin Charles Carroll. Charles was the only Catholic who signed the Declaration of Independence. He also lived until 1832. John Carroll was the founder of Georgetown University in Washington.