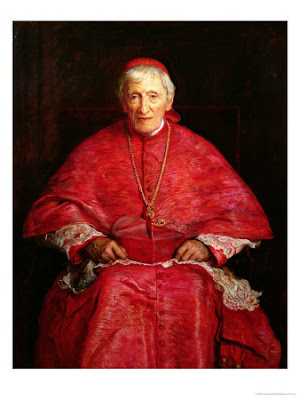 ...extraordinary evening as a crowd gathered in Kensington to hear about a miracle at first-hand!

At Brompton Oratory - where Cardinal John Henry Newman once preached - a man who was healed of a grave spinal illness stood in the sanctuary and told us that the healing had come as a result of prayer through the intercession of Newman, and that this has been accepted as a miracle by the Church.

A copy of the Millais portrait of Newman stood alongside, its vivid colours glowing in the soft light beneath that great dome. History seemed to merge into the present as Deacon Jack Sullivan told his story - how he had begged Newman's aid as he sat in pain, distraught at the thought that he would have to abandon his studies and would never be ordained, his inability to walk or move making service as a deacon impossible. The miracle - initially of relief of pain so that he could continue to attend college, and then of complete healing, with doctors baffled as Sullivan bounded up and downstairs and along corridors - was described to a rapt audience.

It was a very London occasion - Catholics gathered at this great church on an Autumn evening, lamplight highlighting the golden and russet Autumn leaves, traffic humming. "Saints are our older brothers and sisters" said Jack Sullivan "We say we believe in life after death, but do we really? A miracle like this teaches us in the reality of the Communion of Saints, in which we profess our belief when we say the Creed". Across the decades, beyond two world wars and a thousand massive social and political changes, a saint from Queen Victoria's London was being honoured and remembered...

Autumn is a time for history.The Queen at Westminster Abbey for a service at eleven o'clock and our house, like others, falling silent for two minutes, along with the workmen in the road outside and people in shops and schools and offices.
Posted by Joanna Bogle at 7:26 pm

Well it was certainly WOW for us Brummies Joanna! Not that we're competing!

Newman probably deserves canonisation. His "Idea of a University" inspired me at a time I was trying for Oxford.

Joanna, I would have loved to have been present and heard Deacon Jack's testimony, who I understand is a permament deacon in the archdiocese of Boston.

Hope you are keeping well, Andrew.