On this Remembrance weekend... 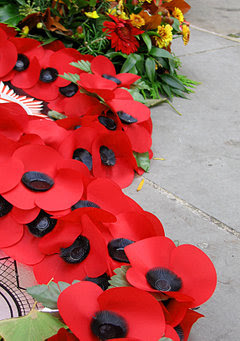 No, I don't think so either.

In the case of the Second World War there are many surviving ex-servicemen still living, so try asking some of them.

The Queen's Speech outlining the plans of this present Government, sets out the plan for human/animal hybrids. Concerned? Get the info from this website right away and write to your Member of Parliament and also to members of the House of Lords. The Govt is rushing this through at speed, so we all need to act quickly.
Posted by Joanna Bogle at 4:30 pm

The overwhelming majority of those who fought were not volunteers but conscripts. Consideration of their ultimate sacrifice is even more invidious when one remembers that they were forced to fight in defence of Western values, and what those values have become. Indeed, those very liberties in defence of which our forebears gave their lives are being eroded incrementally, and scarecely a word of objection is raised.

The world and human nature was as bad before the two world was as it is now. Its called original sin and is ineradicable. When you listen to veterans many ask,was it worth it? All agree that war should not exist. You claim not to watch the television, in the UK at least; the USA breaks your resolve. If you did you would have seen every day, Monday to Friday, the five surviving British veterans of WW1,all over 100, expressing these views at the end of the BBC news. Mankind is fallen, mankind sins, sins are mortal or venial, sin will never cease, however great the sacrifice of life in battle. Heroism does not turn mankind thereafter into robots programmed only to do good. Part of the futility of war lies in the malign consequences of the aftermath. Given the overall developments of the c20 the mores of the present time which you rightly deplore were inevitable. But consider,too,the pluses. If you don't you will continue to be Queen Canuta.

Perhaps I've got this wrong, but weren't the wars fought for freedom? If so, when freedom is granted to minorities why do you want to impose tyranny? Freedom enables you to bully. Freedom also enables the bullied to fight back and claim their right to be considered as human beings. There were gays who fought in both world wars. Lesbians nursed them, worked in munition factories, and doubtless handed out white feathers. Gays and lesbians continue to serve in the armed forces. I hope you get your new skirt caught up in your bicycle wheels.

Cranmer's comments about conscripts are not true of WWI, though his main point is sound.

As early as 1915, it became evident that the flow of volunteers was drying up.

The British Army had lost more than half a million soldiers: they had been killed, wounded or missing presumed dead. Since volunteers were not forthcoming, conscription was introduced.

In 1916 the Military Service Act was pased by Parliament - this was soon nicknamed the 'Batchelor's Bill' as to start with conscription only included unmarried men between 18 and 41. But it was widened in May 1916 to include married men as well. By April 1918, it had been expanded to include men up to 51.

Conscription obliged those who were called up to fight for their country, and the law endured for more than half of the duration of the war.

On the side of the angels said...

They fought for a better world...and irrespective of the politicians and paper shufflers betrayal and duplicity - they did their job !!!
Admittedly I'm biassed, my great grandfather was a DCM, a Russian knight grand cross and was nominated twice for a VC and it destroyed him....he didn't just give four years to the war he gave forty....
We have a futile war in Afghanstan, an illegal unjust war in Iraq - we deliberately manipulated the situation in the balkans to actuate a war but meanwhile millions died in Rwanda, ditto the Congo and even now darfur impinges upon the world's pleas for Justice and we do nothing....
Simultaneously all the 'freedoms' won are systematically eroded - trial by jury, double-jeopardy, imprisonment without trial, extraordinary rendition and do the general public care ? No they are numbed by the daily mail/sun/jeremy kyle/take a break/eastenders mentalities into pragmatic situationist do whatever you want laissez-faire-ism and meanwhile society falls apart - feral youths - sexual profligacy and irresponsibility and an abortion rate approaching 50 million globally - the handicapped never see the light of day from the womb, the elderly and infirm are disposed of with the consent of their families who think there's such a thing as dying with dignity, and scientists think they can treat life as any means to an end and the politicians bend over backwards to placate them. People hide behind credit and alcohol and sexual gratification to dismiss all reality or responsibility and thus families are destroyed en masse....
Insanity reigns - and these war veterans do not recognise this world...and I wouldn't be surprised if they wondered why they bothered !

Wonderful rhetoric, seraphic one! But weren't both world wars started because of the invasion of territory? Belgium in WW1, Poland in WW2? Talk of freedom followed as a justification, carnage was the result.

Doesn't anyone care about the human/animal hybrid issue??
It always seems as if the majority of people who write into this blog only care about debating issues that are really not issues...
War is fought so evil can be overcome for the better good for all people. The way we are going is not proving to be the better way for the human race. As far as gays fighting in WWII-yes they have come out now and have said that many of the natzi's were into homosexual behavior along with other pervertions...I am sure there were other gay men and women fighting in the war also..what is your point? The bible is the Word of God and homosexuality was a sin in the 1940's just like it is a sin today..Joanna getting her skirt caught in her bike won't change that. If we love gay people we will tell them the truth-the truth (which is the word of God)will set them free--set us all free-no matter what our sin is.